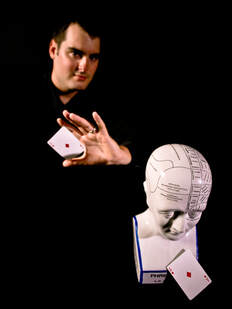 ​Anthony “Tony” Barnhart is Associate Professor and Chair of the Department of Psychological Science at Carthage College, in Kenosha, Wisconsin. He received his Ph.D. in Cognitive Science from Arizona State University in 2013, where he began his graduate career with the intention of being a language researcher. To this end, he has published research examining the processes underlying handwritten word perception, a domain that has been largely ignored by psychologists. However, Tony is also a part-time professional magician with over 30 years of performing experience. His research trajectory changed in 2010 with the publication of the book Sleights of Mind: What the Neuroscience of Magic Reveals about our Everyday Deceptions, in which he was featured as a consultant and teacher on the science of stage magic.

The scientific interest that the book garnered motivated Tony to shift his focus toward the interface of science and magic. Magicians are informal cognitive scientists with their own hypotheses about the mind. Tony empirically tests these novel hypotheses and introduces magical methodologies into the laboratory to increase the ecological validity of experimental studies of attention and perception. His work on the science of magic has been featured in Science News For Students as well as in national and international television appearances and documentaries. Most recently, his work was featured in an episode of The Nature of Things, Canada's long-running science program. Beyond the science of magic, Tony continues to study handwritten word perception as well as a variety of other topics, including the development of motor expertise, the relationship between eye-movements and memory, and how attentional deployment is influenced by language processing.

In the classroom, Tony strives to impart enthusiasm for psychological science and critical thinking in core curriculum classes like Introductory Psychology, Research Methods, Sensation & Perception, and Cognitive Psychology. In upper-division special topics courses like his Psychology of Magic class and in supervising student research, he encourages students to translate what they have learned about the mind to behavior in the real world and to generate their own testable hypotheses through the integration of knowledge from different domains.